A friend of mine recently asked me if the The Last Breakfast Club was good.

For those of you who don’t know, The Last Breakfast Club is the newest musical parody from Rockwell Table and Stage in Los Angeles. I have gone to see the show every weekend since it made its preview debut three weeks ago. When I saw her question, I wanted to laugh. Obviously the show was good if I’d seen it so many times, but I knew what she was really asking–Would I recommend it? While the answer is fairly simple, I felt that I had enough thoughts about the show to merit an entire blog post, so here we go: my review of The Last Breakfast Club: a Musical Parody. 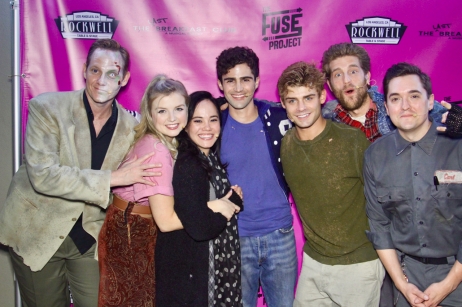 This innovative musical is packed full of 80s tunes that feel like they were written for The Last Breakfast Club. If you’re not singing them along with the cast during the show, you will definitely be singing them to yourself for the rest of the week. Part of the fun of the show is trying to guess what iconic 80s song the characters will jump into next.

As the cast of The Last Breakfast Club comes right out of the gate chorusing, “It’s the end of the world as we know it,” we understand that they’re talking about the nuclear zombie apocalypse that has trapped them in the library. But it also kind of feels like they’re talking about our world too. In a present where our president regularly tweets about his latest indignation, the threat of nuclear war hangs in the air and children are killed at concerts, it certainly feels like the end of the world as we know it. Hardly any of us would claim we “feel fine.”

The Last Breakfast Club doesn’t ignore our current political climate. It embraces it. The show explores our deepest hopes and fears for this new world. At one moment it’s blaming Republicans, Christians and white men (which some may argue are synonymous) for the doomed apocalyptic world the characters are forced to live in. The next, it’s advocating for love and compassion in spite of it all.

This amazingly talented cast is increasingly mind blowing with every scene. The unique layout of the Rockwell theater allows for most of the audience to gain at least one closeup of the cast during the show. This unique set-up explains why each cast member boasts both stage and screen credits. Both sets of skills are fully utilized in the show to great effect, switching effortlessly between big over the top “theatrical” moments and nuanced quieter ones.

The Last Breakfast Club calls itself a parody of the original 1985 John Hughes film, but that label isn’t quite fair. It’s clear the show has a great respect for the original, preserving most of the film’s format and signature lines. At times, it feels like a revisionist take on the film. This updated version of the story tackles the age old issue of Allison’s makeover (selling out or naw?), the original couples (would they have lasted past detention?), the assumed boy-girl couple structure (you might of gotten away with it back then, but today it’s considered “heteronormative”) and the Bratpack’s general treatment of adults as the cause of all their problems. The musical doesn’t shove its modern perspective onto the original to the point of losing the film’s original intent, but it also isn’t afraid to address some of the issues with the movie.

In spite of several revisionist changes, however, the Breakfast Club is still #sowhite. The majority of the seven cast members in the new show are Caucasian, reflexive of the all-white cast from the film. On the one hand, this reflects more on the original filmmakers than the producers of the latest reincarnation. The moral of the original film was that “each one of us is a brain…and an athlete…and a basket case…a princess…and a criminal.” Apparently the only way to teach that lesson in the 80s was to make every character white and therefore, relatable. 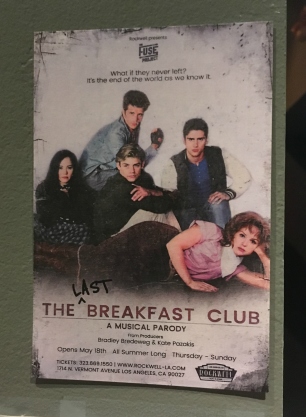 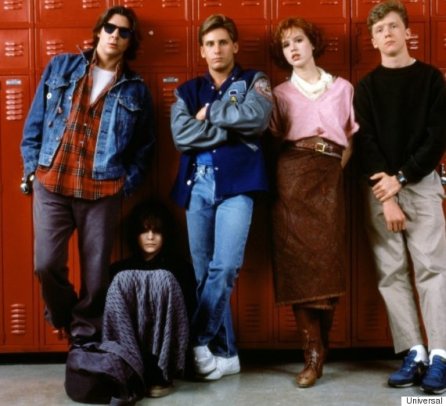 There is, of course, an easy explanation for the lack of racial diversity in The Last Breakfast Club. The premise of the show is that the same characters from the film have aged roughly ten years, so each of the cast members physically resembles their cinematic counterpart. However, it’s worth questioning whether, in a world where these beloved characters have been given new sexual orientations and religions (and in Claire’s case, hair color), might they have been given new ethnicities as well? In an alternate reality where the characters crack culture references they shouldn’t know and reference both the original movie and the musical they’re currently starring in, the audience must quickly adapt a strong suspension of disbelief. Might this suspension have also held up to, say, an African American Princess or a Latino Brain? It is unclear if it would have worked, but a part of me wishes the producers would have been willing to find out.

Which isn’t to say that the show isn’t perfectly cast, because it is. 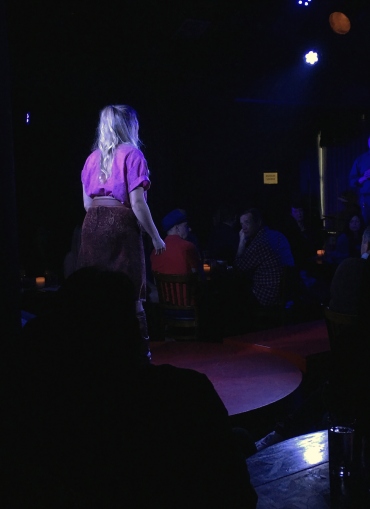 Anna Grace Barlow brings a sweetness and a sass to Claire the Princess, as well as an acute vulnerability most present in her big solo number where she reminisces on time spent with her parents. Barlow brings down the house every time during said solo number with her powerhouse of a soulful voice and tear-filled eyes. As her sister Abigail stated so well, the music of the show fits her voice perfectly. In addition to the spotlight moments, Barlow’s sweet harmonies perfectly round out the overall sound of the show.

Jonah Platt anchors the show as Bender the Criminal, riling each character in turn. He holds all the brashness and insensitivity of the original character, but Platt’s natural charm bubbles through in time for the tender moments that eventually come toward the end of the show, most notably a heart to heart with Vernon. This scene in particular sets Platt’s version of Bender apart from the original, mixing his biting humor with remarkable sensitivity.

While Platt prods the plot forward, Garrett Clayton holds the show together in a virtual group hug as Brian the Brain. His soft insistence for everyone to get along is broken only by his piercingly amazing high notes and incredible comedic timing. Fans of Clayton from the Teen Beach movie franchise may even hear his signature Tanner laugh break through some of Brian’s iconic “Sir?”s during a few of his particularly funny scenes with Vernon. 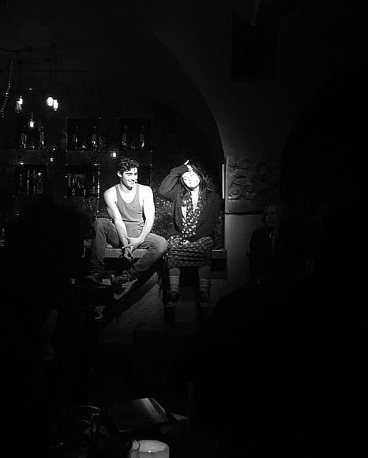 Rockwell veteran Lana McKissack completely commits to all that is Allison the Basketcase, including the character’s numerous quirks and various animal noises. Her skills as an actress, however, truly shine brightest in the serious moments where she gets to spit straight truth. The complexity and sensitivity she brings to her scenes with Andrew, in particular, make the characters’ relationship one of my favorites in the show.

Four time Emmy nominee Max Ehrich brings vulnerability and heart, as well as fierceness, to Andrew the Athlete. He manages to simultaneously wear his heart on his sleeve while fighting to keep his mask up. His Act One return to “total assholery” may be initially off-putting, but the character lets his true self come through in time to enthrall the audience with his showstopping ballad in Act Two. 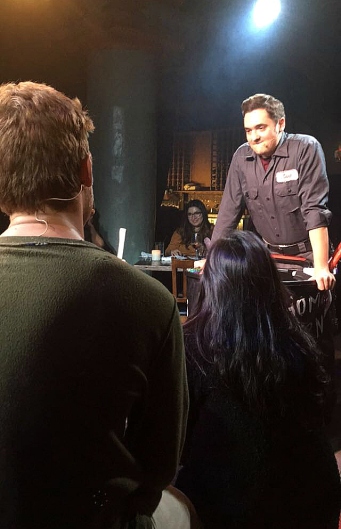 The two adult characters, Vernon as played by Jimmy Ray Bennett and Damon Gravina’s born again Janitor, are just as charming as the young adult characters, bringing another level of humor and ridiculousness to the whole production.

Now back to the original question, do I recommend the show? My answer is a resounding YES… with two caveats.

The first is language. The show’s social media coordinator joked that the show has “zero f*cks to give…. because they’re all in the show.” He’s not wrong. To be fair, if you’ve seen the OG Breakfast Club, its cast also had a lot of fun throwing around f-bombs. But it does bear noting that those sensitive to strong language or those on the younger side should probably skip out on this particular show.

My second warning pertains to the way Christianity is portrayed in the show. The show relies heavily on the use of satire in order to comment on religion, ridiculing various aspects of Christianity in a way that some may find offensive or sacrilegious. Now, the show does not hate religion or Christianity as a whole. The hate-filled, holier-than-thou Christian character does not denounce his faith or speak ill against God in order to become likable by the end. He does have a change of heart, of course, but the show does not demand that he give up his faith in order to be considered an ally. The show also makes it clear that religion itself is not the problem, but rather how people abuse religion. Still, if this seems like the type of humor that would keep you from enjoying the show, maybe just stick to the original movie for now.

There are no better last thoughts to leave you with than these well-spoken words from The Last Breakfast Club’s director, executive producer and co-writer, Bradley Bredeweg, “Let us laugh together as 150 people in a bar in Los Angeles while we also talk about and explore some really important and scary shit. Because entertainment is a powerful medium that not only makes us laugh and cry… it provokes, encourages, raises awareness, and it allows us to look inward.”

For those of you willing to laugh, cry and be challenged, please head down to Rockwell Table and Stage this summer and show this amazing production some love!